The Art of Belly Dance, for Beginners: Arabian Sands

A mixed bag but useful

I feel like IAMED are trying to cover too many bases with this DVD!  "The Art of Belly Dance for Beginners" suggest it's for people who want to learn belly dancing;  but the second half, "Instruction and Flexibility Workout" make it sound like a fitness tape.

In fact, both are true to a degree.  Watching it, I get a sneaky suspicion the three sections weren't originally intended to appear on the same DVD.

The first section, taught by Paulina, is designed to give the absolute beginner a good understanding of basic belly dancing.   In fact, every move is explained so patiently and in such detail, you may get bored if you've already had a few belly dance lessons!   She explains and drills several belly dance moves, finishing with a 3-minute, follow-along routine using the moves just learned. 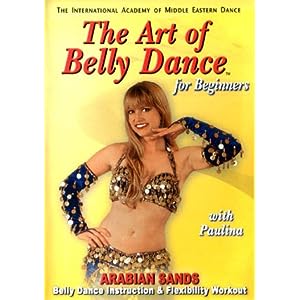 The second section is a 30-minute belly dance fitness workout with Jindra Payne.  My first complaint about this section is that she uses stretches to warm-up.  In this day and age, no one should be using stretches to warm up before dancing - we did it twenty years ago, but these days we know it actually increases the risk of injury.

The second problem is that she takes time to explain moves already well-covered by Paulina (which is why I think the two sections were filmed for separate DVD's).    The explanations hold up the workout unnecessarily.

Finally, Jindra's assistants aren't always doing the moves correctly.   That may be deliberate, if they're meant to represent students - but I'm not sure showing incorrect moves on an instructional video is a good thing, even if they are in the background.

The third section consists of unrelated performances by Paulina and another dancer called Aleya.

The Art of Belly Dance, for Beginners: Arabian Sands on eBay

By continuing to use the site, you agree to the use of cookies. more information